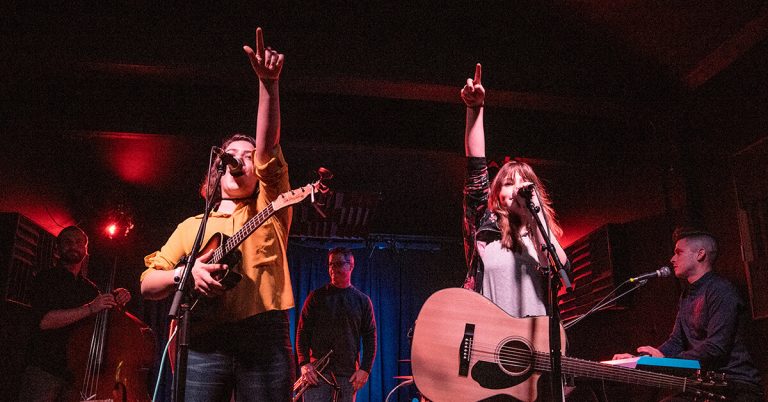 The  Roots N Blues N BBQ music festival in Columbia, MO is a yearly event sponsored by StorageMart. The festival brings in over 30,000 people, as well as an incredible line up of bands and musicians. This year, top-tier performers include the Avett Brothers, Nathaniel Rateliff & The Night Sweats, Sturgill Simpson, and many more amazing musicians. Sharing the stage this year is a sister-duo that by all accounts is a rising star in Columbia: The Burney Sisters.

Olivia and Emma are a dynamic sister duo with an indie folk/pop sound. They have been singing around the house since they were barely able to walk, and with some vocal coaching from mom, they began harmonizing before picking up an instrument in early 2016. Olivia found her first love in the ukulele after finding an aged specimen at a local garage sale for one dollar. After a few Youtube tutorials, she was well on her way to being the performer and (now) teacher that she is today. Currently, Olivia writes the bulk of the tunes that the duo performs, including their single “Constellations” and the popular “Plastic”, which appears on their EP that debuted in December of 2017. Not to be outdone by her older sister, Emma picked up a guitar at the age of 9, and began learning songs on her own. She helps Olivia with all of the arrangements and harmonies, and has since expanded her instrumental arsenal to include bass, banjo, keys, and a recent revival of her love for the fiddle.

The Burney Sisters are kicking things off on the MO Lottery Stage on Friday evening, September 28th, 2018. This will be their debut performance at the festival. Their soul piercing sibling harmonies are reminiscent of The Avett Brothers, First Aid Kit, and The Staves, and you can find their EP “Running Away” on Spotify, Amazon, Google Play, and iTunes.

The sisters are working on their first full length album with Gaslight Studio in St. Louis. The album is set to be released July of 2018.