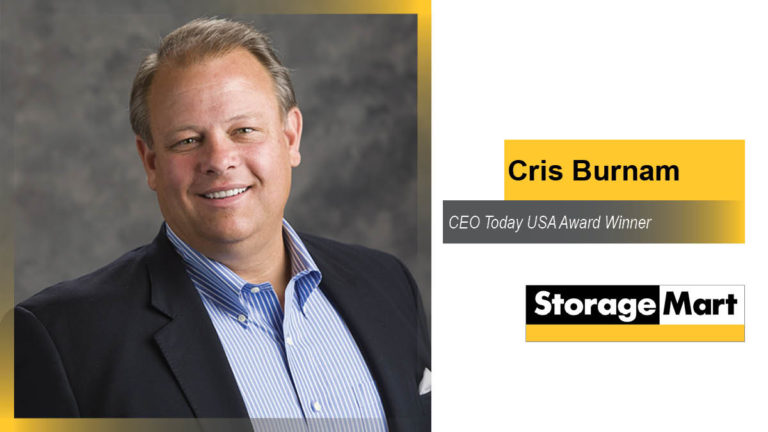 CEO Today Magazine rounds out every year with its annual CEO Today USA Awards issue. It is meant to celebrate the success, innovation, and strategic vision of CEOs across a number of sectors and industries in the US. In 2021, CEO of StorageMart, Cris Burnam, was honored with this achievement as one of only three winners in the state of Missouri.

Cris Burnam has been dedicated to the self storage industry since 1987. His parents, Gordan and Mickey Burnam, founded StorageMart in 1999, along with him and his siblings. Since then, the Burnam family has grown the company into the largest privately-owned and family-run self storage provider in the world.

With three generations of Burnams with the company today, Cris oversees the operation of more than 250 locations. An important aspect of business for the Burnam family, even after all these years, is to maintain its small-town, family values despite its global scale.

Cris and the Burnam family know that it takes a customer-centric, dedicated team of employees to run a successful storage facility. Every member of the Burnam family has spent time as a manager or working maintenance at a store. This experience is essential to developing an appreciation for the hard-working team members behind every successful location.

“We offer customers easy, clean service – the same promise as when the company opened in 1999. We do everything we can to make self storage easy for our customers. Whether it’s maintaining our properties or helping someone find the perfect unit, it’s the little things that add up to a great customer experience.” Cris Burnam, CEO, StorageMart

Giving back to the many communities in which the company calls home is just as important to Cris and StorageMart as the quality of services provided to customers. Over the years, StorageMart has donated millions in sponsorships and rent to local and national charities alike. Most recently, StorageMart was named an international partner of Big Brothers Big Sisters of America.

While his values may be humble, his aspirations surely are not. Cris led the transaction between GIC, Cascade Investment LLC, and the current owners of the company, TKG Management, the Burnam family, and other investors. Prior to that, Cris and the executive team at StorageMart completed a significant acquisition in the United Kingdom and a $416 million takeover of a publicly-traded REIT on the Toronto Stock Exchange.

Over the course of his career in self storage, Cris has completed more than $8 billion in self storage real estate transactions; but what he values most today is his role as the proud grandpa of his first granddaughter. Congratulations, Cris. This award is well deserved, and we can’t wait to see what’s next.

COVID Vaccine Employee Bonus. Plus a Call on the Industry to Step Up.

COVID Vaccine Employee Bonus. Plus a Call on the Industry to Step Up.