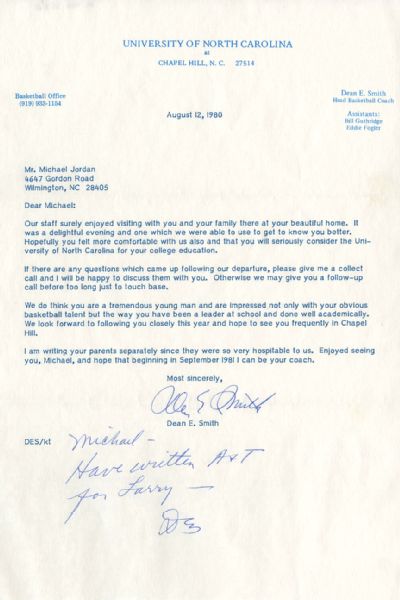 A recent storage auction in North Carolina has netted one lucky bidder several pieces of near one-of-a-kind memorabilia from the collegiate career of basketball legend Michael Jordan.

The two more noteworthy items are recruiting letters sent from the University of North Carolina to Jordan while he was a high school senior in Wilmington, NC. One letter is from then assistant coach Bill Guthridge. The other came from head coach, and member of the Basketball Hall of Fame, Dean Smith. Each letter is predominantly type written, but each is also hand-signed with an additional hand-written note to Jordan added.

Each of these items was originally on display at Michael Jordan’s 23, a restaurant which opened in Chapel Hill, NC in 1999 and closed in 2003.  After the restaurant was shut down, some of the furnishings and decorations went into storage, where they sat for more than a decade before the unit went into default and fell into the hands of one fortunate bidder.