A Piece of Baseball History Goes to the Auction Block 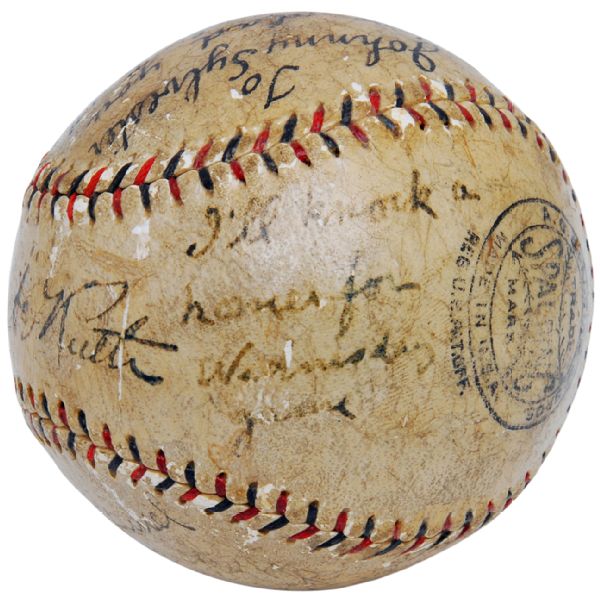 It’s one of the most famous bits of folklore in baseball history.  It was the fall of 1926 and the New York Yankees were in St. Louis to play the Cardinals in the World Series.  Famed slugger Babe Ruth, one of the most famous men not just in his sport but in the entire country, and five of his teammates signed a baseball and had it sent by air mail back east to little Johnny Sylvester, who had been injured falling off a horse.  The inscription Ruth added read “I’ll knock a homer for Wednesday’s game.”

The Babe was true to his word and more, hitting three home runs in the game.  Newspaper accounts also described a drastic improvement in Johnny Sylvester, with one headline screaming “CURED! BY HOME RUNS.”

Nearly 90 years later one baseball fan will have the opportunity to own the legendary ball sent to Johnny Sylvester.  After spending 25 years in the Babe Ruth Museum in Baltimore, Maryland, Sylvester’s son has consigned Grey Flannel Auctions to sell the ball to the highest bidder.  No reserve price has been set yet (the record price paid for a Babe Ruth signed ball is $388,375 in 2012), but the online auction will begin January 20 and end February 6 (Babe Ruth’s 119th birthday).

While few of us have a baseball signed by Babe Ruth lying around, many fans do take pleasure in collecting the autographs of their favorite players on baseballs.  Here are some tips for preserving your autograph collection.

•    When getting a ball signed, it’s best to use a ballpoint pen.  The ink is less likely to run or smear.  Stick with blue or black ink as the autograph will show up better on a white baseball.
•    After first getting a ball signed, allow the ink to dry.  Don’t touch the signature for at least an hour.
•    Don’t apply any sort of lacquer to a signed baseball as a means of “preserving” it.  The lacquer will actually crack and chip over time, degrading any potential value of the ball.
•    Keep your signed baseballs in UV resistant cases.  UV light will cause an autograph to fade over time, so keeping your signed baseballs covered is essential.  Avoid purchasing any cases claiming partial UV resistance.  A case either blocks UV light or it doesn’t.
•    You’ll most likely want your signed baseballs on display for you, and anyone who visits your home, to see.  Avoid keeping them under direct light.  Your cases will block against UV rays, but any direct light can fade an autograph over time.
•    If you’re storing your signed baseballs, choose the spot carefully.  You want them kept at room temperature and a moderate level of humidity.  Too much heat and moisture can fade an autograph or cause baseballs to warp.  Too little moisture can dry out baseballs and cause them to crack.  We’d suggest you consider a climate-controlled storage unit for your autograph collection and other pieces of memorabilia whose preserved condition you want to ensure.

They say the word “fan” originates from the word “fanatic.”  Follow these tips if you’re passionate about baseball and want to preserve your autograph collection for yourself and generations of fans to come.