Storage Mart > Blog: Life Unboxed > News > Self Storage in Brooklyn Is the Sound of Diversity

Self Storage in Brooklyn Is the Sound of Diversity 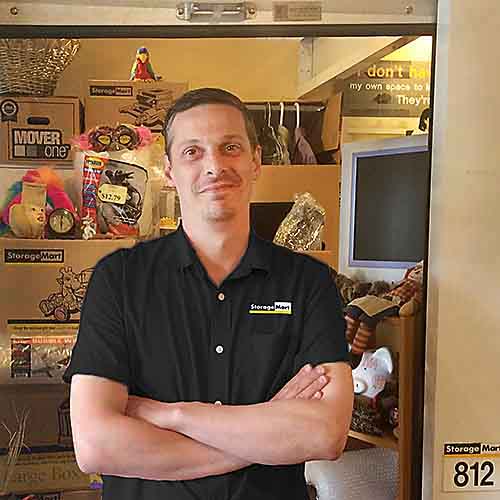 Chris Hovanec rarely gets lonely at work even though he’s often the only person in his 87,493 sq. ft. workplace. This isn’t his first job in self storage but it’s his favorite because of the people he serves – including his boss.

“I guess the third time’s a charm,” Chris said, explaining that he worked for two other national self storage companies but left the second job when his boss went to work for StorageMart six years ago. “It’s a smart move to switch your profession when you like your boss,” Chris said. “And when Fred (Lechene) gave me the chance to work at the Wallabout location, that put me right where I wanted to live – Brooklyn!”

The musician and former sound engineer loves working in self storage in Brooklyn because of the “incredible diversity of people I get to work with.” In the early 2000’s, Chris recorded music from a wide range of independent bands, from pop to rap, from punk to heavy metal. “I worked with people from all walks of life back then, just like I do now,” he said. He prides himself on keeping his store as clean as the recordings he made for the regional bands from New York years ago. He’s a bit of a perfectionist which helped him in both fields.

“StorageMart gives me the tools to use so I can do my job easier which means I can take better care of my customers. Everything runs smoother when the units are clean and the doors are all dusted,” Chris said. But it’s the relationships he’s built over the last six years that prevent him from being lonely. One of his favorite customers is a neighborhood icon named Pete.

“Pete still lives in the same neighborhood, in the same house where he grew up,” explained Chris, who gets to share in one of Pete’s passions – rare comic books. “I’ve learned a lot about comics. Pete’s shown me his Amazing Stories edition when Spider-Man first appeared. He let me take a photo or two because he knew that my brother is a big Spider-Man fan.”

Chris isn’t as fast as Spidey behind the counter but he doesn’t leave any webs either. “If someone walks through the door and needs a storage unit, I can show them around and have them in a unit in less than ten minutes,” he said. Speed is a need for Chris because his store is one of the top-renting locations in Brooklyn. “We get lots of practice,” Chris said, smiling.

Even fame wouldn’t get in the way of Chris providing clean and easy service for his customers. “Storage Wars filmed two episodes here several years ago but I didn’t get much time to see how they produced the show. I didn’t think that it would take many people and that much gear to film it. I had my hands full just taking care of my customers!”