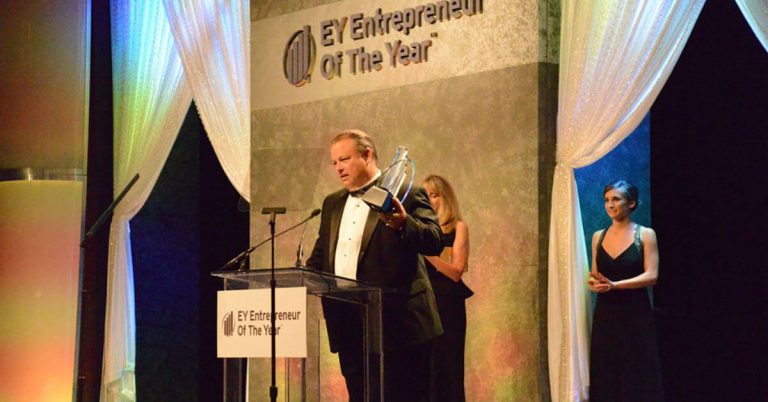 “Focus on the customer experience, because that’s what matters most.” StorageMart president Cris Burnam embodies this mantra and incorporates it into his daily work, and it’s this drive that has garnered him the prestigious EY Entrepreneur Of The Year™  2014 Central Midwest Services & Real Estate category.

Cris attributes his success to the hard work and talent of his family; his father, Gordon Burnam, has been a mentor to Cris throughout his career, while his two brothers, Mike and Tim, and sister, Kim, all work closely alongside him. Cris says of Mike, his brother and StorageMart CEO, “When you put us together, there’s great synergy – the trust is there. About the time I’m thinking something, my brother has already picked up on it, and is saying it.”

In his statement, Cris also affirmed, “My hope is that being recognized for achievement as an entrepreneur reminds others in the trenches that ‘it is the courage to continue that counts’.” We here at StorageMart couldn’t be prouder of Cris for his accomplishments!

Cris was selected for this award by an independent panel of judges and chosen from among 23 fellow entrepreneurs. He will be named in the EY Entrepreneur Of The Year Hall of fame, located at the EY headquarters in Times Square, New York. A virtual hall of fame is also hosted online.

Ernst & Young, or EY, is one of the largest professional services firms, with operations spanning the globe and a dedication to improving and refining the business world through recognition of up-and-coming entrepreneurial efforts and leaders.