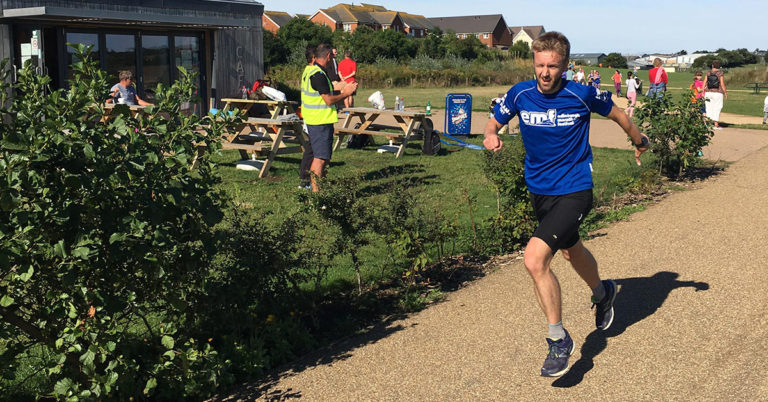 If you happen to be on Chapel Road near the StorageMart in Brighton, UK and you see a super fast blur go rocketing past you with flames and lightning bolts in its wake, don’t be alarmed.

You see, Adrian runs, and he runs a lot, and he’s good at it. When he’s not providing outstanding customer service on the job at StorageMart, he’s typically training for one of his upcoming marathons. These running events don’t just bring Adrian health and happiness, he also runs for charity.

Adrian was kind enough to stay still and talk with us for a bit so he could tell us more about his life and work.

SM: So, Adrian, how did you get started running?

Adrian: I first got into running when I was about eight. For many years, I mostly did 5/10 km races while I was growing up. In 2010 when I was living in Brighton, I watched the first Brighton Marathon and saw my brother compete in it. I liked the idea of running a marathon after watching this – you could say this was the day that inspired me to increase my training to prepare to run a marathon!  I ran the 2nd Brighton Marathon in 2011 and completed it in 3 hours 37 minutes; I did this race for Help for Heroes and raised over £100 for them. Help for Heroes is a charity that helps ex-servicemen and women from the UK armed forces.

For the next few years my training steadily increased from running around 700 miles per year to around 1,400/1,500.  The most miles I ever ran in a year was 2000 – this has reduced slightly in 2019 as I’m doing more cycling as cross-training.  Since my first marathon I’ve done several events for charities including Help for Heroes, the British Heart Foundation and Emmaus (a local homeless charity).

Over the years I’ve also competed in a couple of cycle events as well and I completed a sprint distance triathlon back in 2016.  I’ve completed the London to Brighton bike ride for British Heart Foundation twice and also took part in a fifty mile cycle around Sussex as part of the Mayor of Brighton’s cycle.

Since 2014 the number of Marathons I’ve run increased significantly – I was initially only running one a year, but in 2014 I completed the Brighton & London Marathons – both in April, just a week apart! I also took part in two hilly trail Marathons this year in March and June – the Steyning Stinger and Picnic Marathon. The Picnic was particularly hard – it’s the hilliest marathon in Britain, takes place on Box Hill in Surrey and took me about 5 hours 22 minutes – a full 2 hours longer than what I was running a road marathon at. Unfortunately, this event caused me to develop a stress fracture leading to very little running for the rest of 2014 and 2015.

After running so many marathons – most of which in the early days were road-based ones such as Brighton Marathon I started branching out to find more unusual marathons.

The Albion Marathon- a sixty-one lap marathon that was running around the outside of Brighton & Hove Albion’s football ground.

Two Tunnels 50km Ultra – I ran this in 4 hours 2 minutes – it included running about twenty of the 50km underground through two former train tunnels and I succeeded in winning the race overall!

The Mega Challenge – a race I did last year, it has a six hour time limit and you simply run as many 4.37 mile hilly loops of a trail path as you can. I finished eight, did about 35 miles and also came First Place!

Eastbourne Trackstar Marathon- 105.5 laps of a standard 400m running track – I completed this in May last year in 3 hours 21, didn’t mind the monotony of running the same 400m for so long, surprisingly!

One of my goals in life is to reach at least fifty marathons completed and at least one fifty mile ultra race.

SM: Wow! Twenty-six events completed? Beyond all the marathon training, any other sports you’re into and participate in?

Adrian: This is a pretty obvious one- I love running above all other sports, I do also enjoy cycling and swimming and have taken part in a few triathlons over the years.

SM: How long have you been at StorageMart?

Adrian: Eight years including Big Box Storage, or 2.5 years since Storagemart came to the UK

SM: Have you always worked at this location?

Adrian: I’ve also worked in the stores in Uckfield, Brighton, Worthing and Ditchling.

SM: Tell us about a typical day for you.

Adrian: I’ll usually start the day by cycling to work, this usually takes me less than forty-five minutes, do all the usual jobs at work such as inspect the store, ensure its clean, assist customers by contacting closings and leads that need contacting and carrying out check ins. After I finish work and cycle home I’ll often go running either with friends in Hove or with my local club in Lewes.

SM: Tell us about a time you were able to help out a customer that you felt went above and beyond.

Adrian: We had a customer who was trying to sort through some items in his room and he was struggling to see as it was a little dark in the room. Luckily this was one of the days I’d cycled to work so I could lend him my bike headtorch so he could see more clearly in his room!

SM: What is the biggest challenge you’ve faced in your life? How did you deal with it?

Adrian: Attempting to break the three hour mark for a marathon. Back in May 2017 I got my personal best down to 3 hours 10 minutes at the Milton Keynes Marathon. This meant that a sub three (hours) was possible. At the end of 2017 in November I completed a very flat marathon in 3.02 in Brighton (The Velothon Marathon which was an unusual seventy-two laps around a cycle track!). After this it took me two further attempts to get the time below three hours- I just missed it in Brighton Marathon finishing in 3 hours and 5 seconds which was definitely frustrating but in May last year I finally pushed myself in Edinburgh to succeed in two hours, fifty-nine minutes, twenty-nine seconds! This time I found incredibly tough to do – in the months leading up to the race I was regularly clocking up about thirty-plus hours of training every month including running and cycling for cross-training. The last hour at Edinburgh was incredibly hard going – basically my body just wanted to stop and instead I needed to maintain the same pace I had been doing for the last two hours!  In the last eight years I’ve now completed twenty-six marathons including two ultras – I definitely found Edinburgh the hardest.

SM: Name a person that has changed your life in a positive way. What did they do for you to make you feel that way about them?

Adrian: I wouldn’t have been able to do all the running and cycling I do without the support of my wife, Sarah – the thing no one thinks about runners is how they need a support mechanism in the background.  She has been there at events to cheer me on, keep me supplied on longer runs to give me food, water and encouragement. I know I wouldn’t have been able to complete eight marathons last year without her support.

SM: Yay to Sarah for being so supportive! Okay, crucial life question: Cake or pie?

SM: Name something you’re involved in that you feel makes the world a better place.

Adrian: I’ve been involved a few times in raising money for charity – I really believe that by giving my time doing something challenging that helps others makes the world a better place. Back in 2017, I took part in the Mayor of Brighton’s fifty mile bike ride around the Sussex countryside. In taking part I raised a little over £200 for Emmaus who are a charity supporting the homeless throughout the UK including in the local area in Hove. I found the ride tough going as it was a decidedly hilly route. Next year I’m planning on doing something a little more extreme by running a fifty mile ultra for charity.

SM: If you could move somewhere for a year just to see what it’s like to live there, where would you go?

Adrian: I’d love to move somewhere like the Alps/Rockies/Pyrenees – somewhere I could go skiing in the winter, hiking the mountains in the summer and just enjoy the remote beauty of the area.

SM: If you could give the special people in your life a gift what would that gift be?

Adrian: The gift to be happy in their lives and enjoy themselves.

SM: We also hear that Adrian is in the process of training for the South Downs Way 50, which he hopes to complete for charity. We’ll be checking back in on his progress as the event approaches.

Thanks a lot for talking with us, Adrian, it’s been fun to learn more about you, and thanks for everything you do to help make StorageMart a great company!