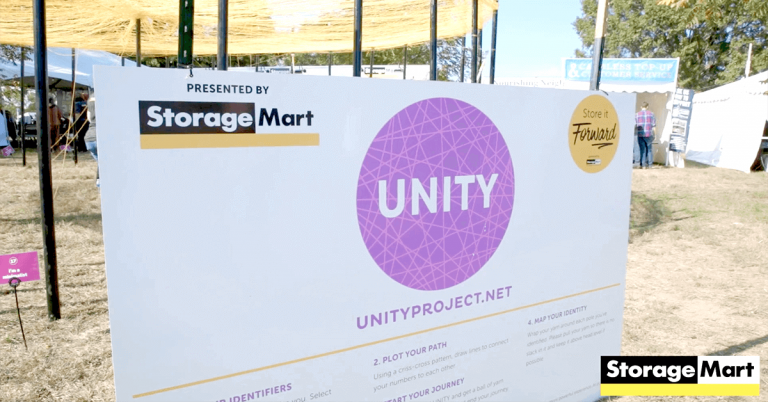 If someone asked you to describe yourself, how would you do it? Would you be able to limit your response to one thing like, “I am a dog person”? Chances are, probably not!

And that’s because a lot of different factors make up who we are and how we identify ourselves. For example, instead of saying, “I am a dog person”, you’d probably say something more like, “I am a dog person who loves sports, believes in climate change, and is working towards purchasing my first home.”

It’s no secret that there’s a lot of divisiveness today between ethnicities, sexual orientations, religions, and political affiliations, so it’s easy to forget that we are all still connected.

This is what the UNITY project has set out to achieve around the world. This interactive public art initiative gives people a chance to celebrate identifiers that make them unique, while also acknowledging all that they have in common with those around them.

As the presenting sponsor at the Roots N Blues N BBQ Festival this year, StorageMart saw the event as a perfect opportunity to bring the community together through the UNITY project.

Connection Beyond Music and BBQ

A love of toe-tapping music and tasty BBQ brought thousands of people together at the festival, but StorageMart wanted to go even further in uniting everyone for the weekend.

The StorageMart team took advantage of the festival’s outdoor location to set up the 32 poles needed for the initiative. As the weekend rolled on, lines of participants joined the UNITY project by wrapping yarns of string around the poles with the identifiers that best represented them. Then, participants had the opportunity to add any other labels they wanted to identify with on StorageMart’s Store It Forward Wall.

The conclusion festival attendees and the StorageMart team drew was this: That even though we all come from different backgrounds and have different opinions, we also have a lot in common. “We saw how everyone was respectful of each participant’s journey,” Heather Gerling, SEO Manager at StorageMart said. “No one had any negative comments, even when they saw people identifying with things that were different from themselves.”

By hosting the UNITY project at this year’s Roots N Blues N BBQ Festival, StorageMart hoped to bring a sense of community to everyone involved and show that it’s okay to be different as long as we don’t condemn others for being different than ourselves. At the end of the day, we’re all stronger together and part of the same community.

At StorageMart, it’s about more than just providing excellent self storage service to customers. StorageMart is dedicated to giving back to its community through charitable giving initiatives like volunteer projects, sponsorships, and donations. Learn more about how StorageMart gives back today.