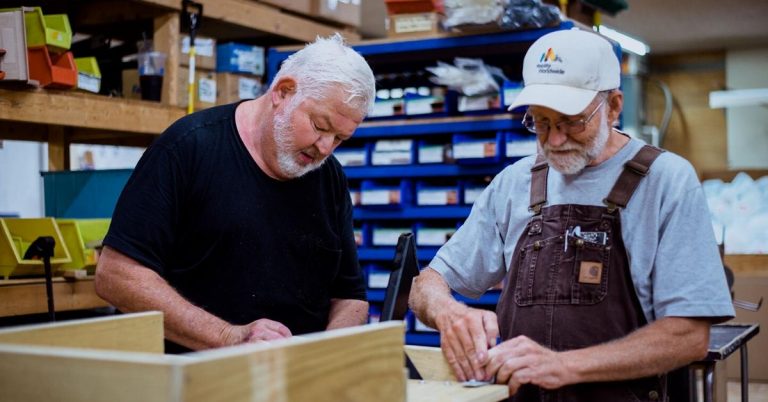 There’s a hum of excitement in the air. Most of the people in the room are loosely grouped along the assembly line, but a few flit back and forth across the workshop, set to an unspoken task. I hang back, listening to the laughter and chatter and trying—somewhat unsuccessfully—to be out of the way.

I’ve taken a break from my usual office setting to come get to know the people at Mobility Worldwide. StorageMart sponsored a mobility cart at a fundraiser for them over the summer. In the process of doing so, I became curious about this multinational organization, started right here in Columbia, Missouri. I also learned that decorating mobility carts is not my forte, but we don’t need to talk about that right now.

As it turns out, Mobility Worldwide is an even larger and more complex organization than I realized. Their slogan is simple enough: Empowering people by providing mobility and more. They make and ship hand powered mobility carts to people who don’t have use of their legs. These carts go all over the world—106 countries, in fact.

All of the parts for these carts are made by volunteers, then gathered by a volunteer to be stored in the workshop, where they will then be assembled by teams that are also volunteers. There are two shifts a day, two people a shift, and it takes them about two hours to assemble anywhere from four to six cars. The budget is set for 35 carts a week, but they’ve had to scale back on production because the budget simply isn’t there—it takes $10,500 a week to keep production at full force. Unfortunately, the need has not scaled back.

There are 20 or so of these affiliated shops across the country, and one in Zambia. Each cart has over 300 materials in it and surrounding me in the shop are rows of shelves with various parts, waiting for assembly. Last year, the organization shipped 2,000 carts.

For the most part, Mobility Worldwide purchases the various materials needed and then the raw materials are turned into the various parts by volunteers. One person might cut the wood while another welds the metal. A company in St. Louis puts a finish on the metal so it won’t corrode. Orscheln powder coats the welded pieces at no cost. Some parts, like clips or reflectors, are donated.

On this particular morning, I had the pleasure of meeting Dave and Jeff, who were kind enough to even let me help assembling a cart. Thankfully, I was better at that than I am painting them—though the guys kept a pretty close eye on me just in case.

The worktable is set up perfectly, all of the tools they’ll need readily at hand. Jeff has been assembling mobility carts for eight or nine years and tells me that when he first started, he had to wait for a spot to open up because there was a waiting list to volunteer. There isn’t a waiting list anymore.

Dave has been assembling carts for three years. He’s Jeff’s third partner and teases that Jeff wore the others out. Most of the volunteer positions can be done alone, but building the carts is a job for two. During our conversation, the guys compared Mobility Worldwide to an ant colony—lots of moving parts with no one person doing it all. But collectively, all of the ants know what to do.

There is a beauty to the entire process—so many people doing their small part to collectively make a large impact in the lives of others.

The ant colony comparison comes to mind again as the room begins to fill with volunteers. It’s Tuesday, packing day. The room is full of people from all walks of life, no longer strangers but friends brought together by a common desire to make the world a better place for someone they don’t know halfway across the globe. They chat and joke, but each knows their role and the work just happens.

I chat for a moment with a woman named Bibal, who has been volunteering there for two and a half years. She’s assembling boxes for tool kits. I ask to see the kits and she hands me a tennis ball container that’s been filled with the tools needed to maintain the cart, along with instructions for sizing and maintenance.

After each cart is assembled, it’s vacuumed and then packed with its toolkit, using empty milk cartons as packing peanuts. Someone explains to me that the cartons can be used to haul water when the cart reaches its final destination. “We don’t always know where they’re going when we pack them,” someone else explains.

There’s an energy in the air as they wait for packing to begin. As the time nears, everyone steps up to their place on the line.  I am once again impressed with the laughter, joy, and genuine warmth that fills the room. As packing begins, I wander off to find Gary, Mobility Worldwide’s executive director for the last five years. He’s been with the organization for about nine years in all.

Gary tells me they have about 3,000 people on their newsletter list, and most of their donations come from that dedicated group. They’re looking for additional donation sources, though, because if donations go up, they can add afternoon shifts.

Then Gary takes me on a tour, and I begin to understand that this organization is so much more than mobility carts. 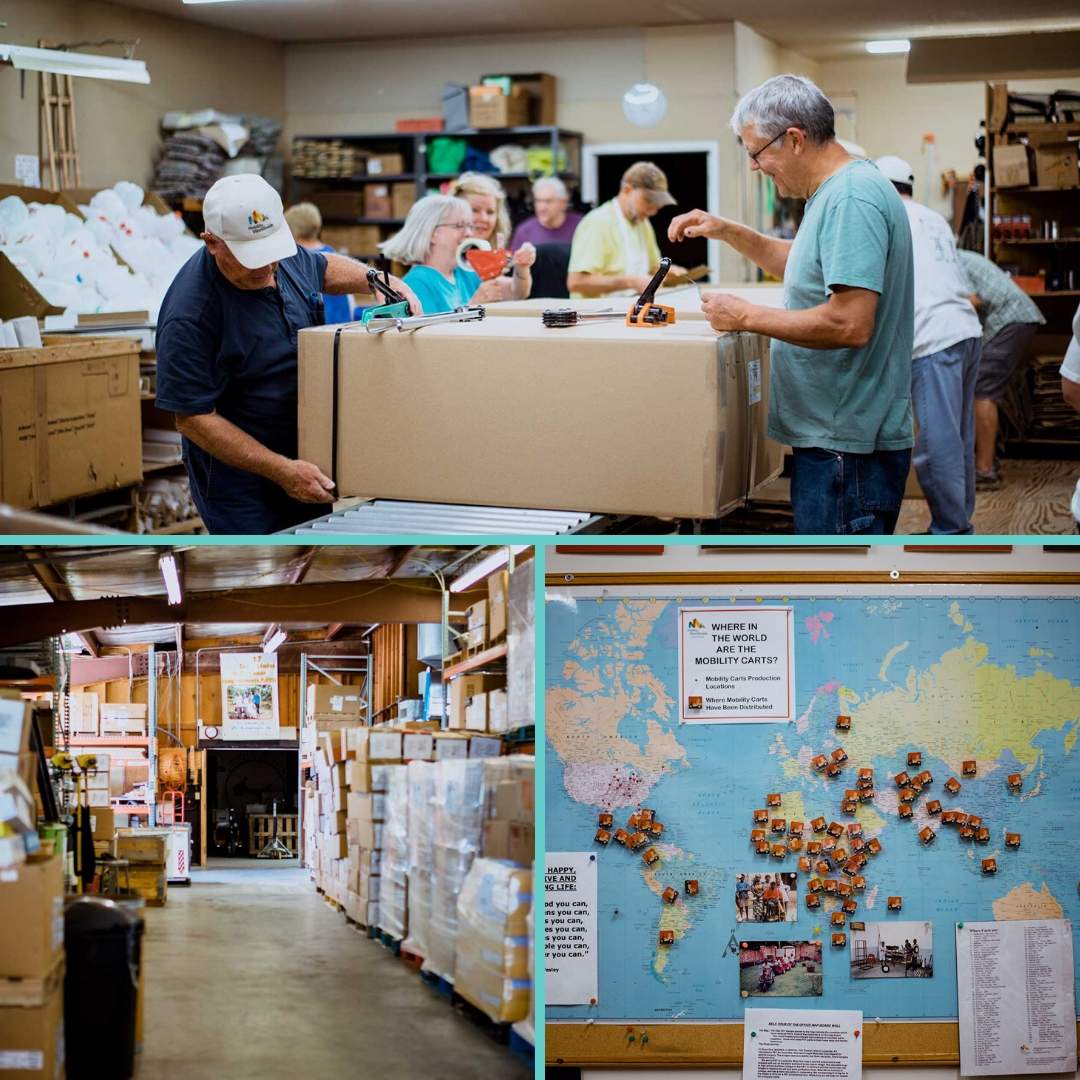 First he shows me the school desks being shipped overseas, along with 60,000 spiral notebooks as part of the Rainbow Network. The Rainbow Network is a sister charity from Springfield, Missouri that runs a microfinance program serving about 50,000 people in rural villages in Nicaragua. They also make and sell bags and pillowcases as part of a project in Belize. Eventually, the two charities merged to solve all of the mobility problems in these little villages.

There are mounds of clothes to be shipped out, but they need to be sorted first. Gary suggests it could be a good team building exercise for a company or department to come in and help sort clothing that’s been donated.

For those interested in donating to the Rainbow Network or Mobility Worldwide, here’s a small sampling of some of the items they can use:

As we wrap up the tour, Gary shows me videos and pictures of cart deliveries. He said word of mouth spreads the news that carts are coming and it’s quite the event. Often, missionaries who are plugged in to a particular area spread the word for them. As I watch the videos of lives being transformed, I am overwhelmed by how far this little charity from Columbia, Missouri has reached across the globe to change people’s lives.

And while my mobility cart decorating skills are humbling, even more humbling is the opportunity to be some small part of something so truly transformative.

Interested in becoming involved? Learn more on their site.

StorageMart Walks Out of the Darkness for Suicide Awareness

StorageMart Walks Out of the Darkness for Suicide Awareness