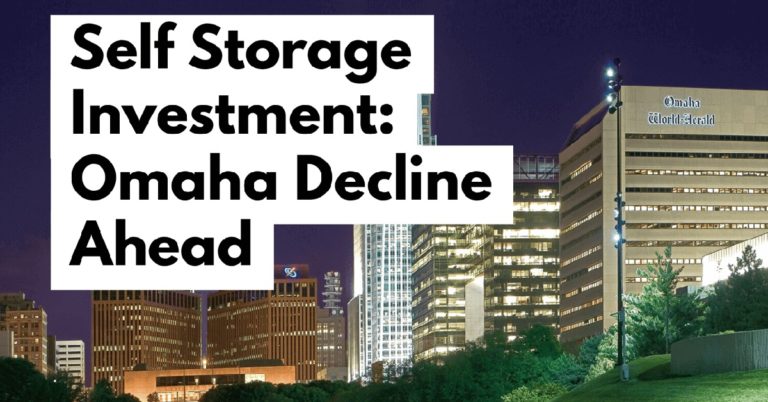 The self storage industry in Omaha is experiencing unprecedented growth. Developers have taken notice of low barriers to entry & ease of entitlements and the resulting boom is sending shockwaves through the industry with unexpected consequences on operating fundamentals.

Operating Fundamentals Under Siege for Omaha Self Storage Operators

Since 2012, the commercial real estate market has been very kind to developers in and around the greater Omaha area, posting impressive returns for developers of multi-family, industrial, and self storage property types.  Omaha’s strong economic performance has provided a tailwind for these real estate asset classes as household income continues to rise and unemployment creeps ever lower, reaching 3% as of December 1st, 2017.  Improved market fundamentals are fueling a greatly pronounced, yet rarely discussed construction boom in one asset class in particular: self storage facilities.  One must pause to ask the question: is a glut of new supply set to impact the Omaha market for storage?

Historically, self storage has been an excellent commercial asset class in Greater Omaha, generating impressive income growth and returns for investors over the last decade. As a result, local banks have recognized this performance and actively sought to boost their lending to local developers of self storage. This commercial lending activity has supported robust self storage construction and investment, and the attractive returns that the newly mainstream asset class exhibits have attracted a surplus of hot money to the sector in the past twenty-four months.

Many new properties under construction in the market are being built in areas that have been previously considered “too nice” for storage. Prices paid for development real estate that could accommodate self storage have risen significantly, as have overall building costs in Omaha. Meanwhile, in the age of Amazon, new capital and investors that previously favored the now declining retail sector are still hungry for the yields that retail once exhibited and self storage previously promised. As retail prospects dim, former box retail locations are going dark in cities all over the nation. Omaha is no exception as several empty boxes throughout the area are rumored to be considering or have already begun conversion of empty retail space into self storage properties.

New self storage owners continue to begin the processes of planning, permitting, and development; however, developers risk killing the proverbial goose that laid the golden egg if this pronounced trend continues. Omaha storage developments in progress as of today represent a dramatic increase in potential total supply for the market.

There are approximately 61 existing storage properties in Greater Omaha of institutional quality representing approximately 3.5 million square feet[1] of rentable storage units. The coming supply glut is profound, as there are 22 new properties in planning or set for delivery in 2017 and 2018 containing new rentable space in excess of 850,000 square feet[2]. This new supply constitutes a whopping 24% increase in supply for the market, which should cause even the most seasoned storage developer considerable indigestion.

Overdevelopment of self storage in Omaha adds one square foot of supply for every man, woman and child. Predicted decline in self storage investments – Click to Tweet

In other words, there will be at least one square foot of supply added for every man, woman and child throughout the entire marketplace. Residents and businesses of Omaha who use self storage will reap the benefits of declining rents and much higher incentives offered to attract new tenants.

Low Barriers to Entry and Ease of Entitlements

Residents are taking notice of the boom as well, with many community members fighting back against development in their neighborhoods. Homeowners in the Elk Valley and Skyline Ranch neighborhoods of the western Omaha Suburb of Elkhorn recently lost their fight in the Nebraska Supreme Court[3] against the Omaha City Council and Planning Board over the city’s approval of a storage development at the corner of 204th and Farnam, indicating that no bolstering of artificial controls to increased development appear to be in sight. Modern self storage buildings can be attractive and relatively benign neighbors, and it is proving to be increasingly difficult for planning officials and municipalities to deny self storage developers permission to build.

Self storage has always been a fixed cost business with only two major variable costs in play that operators must pay close attention to: payroll and real estate taxes. With unemployment hovering around 3% in the city, property owners are facing pressure to raise wages and increase benefits to employees to attract decent talent. Local operators are reporting double digit increases in wages and benefits at storage properties.

Meanwhile, real estate taxes for self storage owners is on the rise as the valuations on their stores continue to increase dramatically. New investors to Omaha have entered the local storage market with over 10 sites being snapped up in the past thirty-six months, often with sales prices at huge premiums to the values listed on local property tax rolls. As these transactions made their way through the local property tax assessor’s office, county officials had no choice other than to increase tax bills accordingly. Some local owners have complained that the tax bills for their self storage properties have gone up by as much as 35% or more[4].

While market demand for self storage is still robust in Greater Omaha, overall operating fundamentals are in decline. No property sector relishes in enormous new supply competing with existing product. Likewise, as wages tax liabilities are on the rise, owners are looking at thinner operating margins than projected and realized in previous years. Excess supply with rising costs could make life more difficult for the self storage industry in Omaha for the next one to three years.

[1] Yardi® Matrix Self Storage – All Properties in Omaha

[4] As reported by StorageMart, an operator of 5 storage facilities throughout Greater Omaha

Earth Day: Harnessing the Power of the Sun in Northern California

Earth Day: Harnessing the Power of the Sun in Northern California