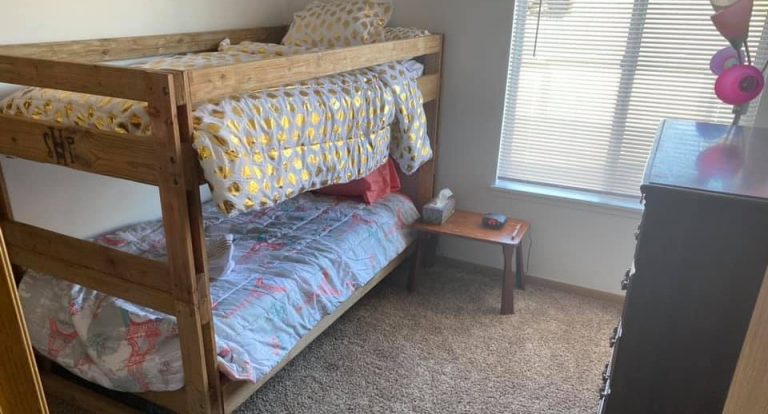 Many of us come home after a long day at work to collapse on our couches in front of our favorite TV shows and then fall into a cozy, warm bed at the end of the night. Sound familiar? Having plenty of furniture for each family member in our homes is a blessing we gloss over most days.

For some, though, furniture is a luxury that seems out of reach, whether that’s due to tragedy striking or financial hardships. One StorageMart Charity Partner founder in Omaha, NE, realized this was happening in his community. As a firefighter, Drew Gerken saw firsthand how devastating a spark could be to a family, their home, their furniture, and their treasured belongings.

Drew was answering a call with the Omaha Fire Department to a house with three children, but something about the home struck him: There was no furniture. The family had suitcases with their clothes inside and at night made makeshift beds by covering up the suitcases with the clothes. Drew took to social media to see if anyone would be willing to donate furniture to this family in need. His call was met with an overwhelming response, and within 24 hours, the family had been given everything they needed to furnish their home. As a result, The Furniture Project was born in October 2013 and officially registered as a 501(c)(3) in 2019.

Since then, The Furniture Project has helped many families in the Omaha community make their houses feel like homes, whether that’s with a set of living room furniture, cribs, or beds for an entire household. Drew collects furniture from anyone willing to donate—and a lot of people were offering their unwanted furniture faster than Drew had room for. He quickly realized he was running out of space to store the furniture while he waited for the next family to help.

Store It Forward with The Furniture Project

That’s where StorageMart stepped in. As part of our Store it Forward program, we provided Drew and The Furniture Project with space to store the furniture that’s making the difference in the lives of families around the Omaha metro. Drew operates out of our Scott Circle storage facility and partners with our staff there to store the furniture, occasionally getting the opportunity to look through items past tenants have left behind to see what can be used by local families in need.

According to Drew, “The storage is almost a coequal component for this project,” so much so that when Mike Rowe’s Facebook Watch show, Returning the Favor, approached him about featuring his charity, he specifically asked that part of the footage was filmed at his storage units at Scott Circle. The entire Returning the Favor crew showed up at our facility in Northwest Omaha in December to shed light on the difference Drew and The Furniture Project is making in the community.

Partnering with The Furniture Project in Omaha, NE

We’re thrilled to partner with Drew and that his organization’s important mission will be broadcast to the online world. You can watch The Furniture Project’s episode of Returning the Favor available now on Facebook Watch.

Interested in learning more about The Furniture Project or donating your furniture to an Omaha family in need? Connect with the organization and its community on Facebook.